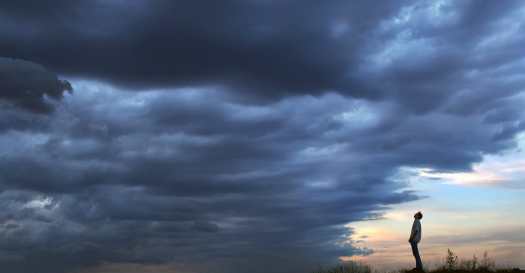 WE ARE ALL CALLED to serve the Lord in one manner or another. We are His co-workers; part of the ultimate synergy—working as partners with God in the quest to spread the Gospel. 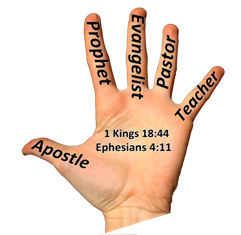 Ours is a five-fold Gospel. Ephesians 4:11-13 says, “So Christ himself gave the apostles, the prophets, the evangelists, the pastors and teachers, to equip his people for works of service, so that the body of Christ may be built up until we all reach unity in the faith and in the knowledge of the Son of God and become mature, attaining to the whole measure of the fullness of Christ” (NIV). This Scripture passage highlights five distinct areas or roles of ministry which God has given to the church so that the Body of Christ can operate effectively and reach maturity. Essentially, the five-fold orientation to ministry places church leaders in groups specific to their gift in order to serve the church. The purpose of five-fold ministry is simply to serve. The end-goal is not merely training ministers within the church; it is to equip the church to become Christ. This is how we are able to participate with Jesus in restoration that comes after redemption.

There are six different forms of leadership throughout the Old Testament:

The three offices having the greatest effect on leadership during the Old Testament were the offices of priest, prophet and king. Remarkably, Jesus truly fulfilled each of the five offices in New Testament leadership: apostle, prophet, evangelist, pastor, teacher. He is the King of kings; our High Priest and Intercessor standing at the right hand of God; He was a prophet; He taught his disciples; He was pastor (a shepherd).

The New Testament leadership model operates quite differently to any we’ve seen in the Old Testament. Although prophets are mentioned in the Old and New Testaments, their ministries are slightly different. The greatest reasons for the different leadership model in the New Testament are important to consider. First, because God’s people now have direct access to the Father through Jesus Christ. Accordingly, we’re not in need of an earthly intercessor, such as a priest. Second, the Holy Spirit—who is the constant presence, power and witness of God—resides in each of us from the moment we claim Christ as our Lord and Savior. Because of these two significant factors, God created a new leadership model for the church following the death, burial, and resurrection of Jesus Christ.

Some maintain that the five-fold ministry was only meant for the “Apostolic Age” (30 to 90 A.D.), and was limited to growing the church throughout the early Christian era. Others object on the basis that it creates an unnecessary elite hierarchy in church leadership. When properly understood, the five-fold ministry takes the emphasis away from a hierarchical leadership and distributes leadership across the Body of Christ in accordance with the call or gift given each of us by God. These leadership roles are not merely “titles” but ministry functions. The focus is not on the individual, but rather on the task being performed. The purpose is purely to prepare God’s people for works of service “…until we all reach unity in the faith and in the knowledge of the Son of God and become mature, attaining to the whole measure of the fullness of Christ” (Ephesians 4:13, NIV).

BOUND TOGETHER WITH GOD

We are bound together with God as His co-workers. This requires sacrifice on our part. We have to lose something of ourselves to Him. Interestingly, it is easier to be a servant than a co-worker. Many today who call themselves servants of the Lord simply lack the capacity to suffer together with the Lord. What the church needs is not a group of able workers but those who are bound together with God through thick and thin, no matter the consequences. This is what is meant by Take up your cross and follow me. When God works, you work. When God rests, you rest. When God withdraws, you withdraw. When God moves forward, you move forward. Bound together. No matter what.

Paul notes the following signs and activities that typically accompany working in the ministry: in great endurance; in troubles, hardships and distresses; in beatings, imprisonments and riots; in hard work, sleepless nights and hunger; in purity, understanding, patience and kindness; in the Holy Spirit and in sincere love; in truthful speech and in the power of God; with weapons of righteousness in the right hand and in the left; through glory and dishonor, bad report and good report; genuine, yet regarded as impostors; known, yet regarded as unknown; dying, and yet we live on; beaten, and yet not killed; sorrowful, yet always rejoicing; poor, yet making many rich; having nothing, and yet possessing everything (see 2 Corinthians 6:4-10).

THROUGH GOOD REPORTS AND BAD

As a co-worker of God, we can expect people to talk about us, judge, us, and try to take the wind of of our testimony. I’m sure you’ve had people speak poorly of you over the years. Sometimes we deserve it, yet we need to be mindful of our public behavior as believers so that we do not detract from the Gospel. Not surprisingly, when we become effective partners with Jesus in His ministry, people begin to look closely at everything we say and do. Usually, Satan leaves us alone when we’re bouncing along, doing what we please, living in the flesh, not doing the Lord’s work. We’re no threat to the devil when we’re not bringing non-believers to the Lord. When we are faithful to God and set out to present ourselves appropriately in society, evil reports may abound concerning us in an attempt to take the efficacy out of our testimony. This is just a part of the spiritual warfare we’re engaged in on a daily basis (see Ephesians 6:12).

Jesus warned His disciples about attempts to destroy their witness. In Matthew 5:11, He said, “Blessed are you when people insult you, persecute you and falsely say all kinds of evil against you because of me” (NIV). Good reports come from other believers and those who have been able to grasp the truth of the Gospel. We need to be faithful co-workers with God; to learn to suffer and to accept all reports and proofs that we are bound together with Him.

Paul told the believers at Corinth that they were co-laborers together with God. He instructed them, “Working together with him, then, we entreat you not to accept the grace of God in vain” (2 Corinthians 6:1, RSV). It is a great privilege to be regarded as laborers together with the Lord, and to be counted as His servants. Despite all the evil we’ve done while unbelievers—even the sins we’ve committed as Christians—God chooses to use us anyway. For me, that was sweet music to my ears. Paul said God’s grace should motivate us to be found still laboring when Jesus returns. The last thing we should want is God to consider it a waste that He entrusted us to labor with Him. Instead, we want to hear, “Well done My good and faithful servant.”

We have received the Lord’s great commission (see Matthew 28:18-20), charging us with working toward fulfilling God’s divine objective—spreading the Gospel to the four corners of the world. In addition, we are to work together with Jesus in reconciling mankind to Him and to the Father. Paul wrote, “This is good, and pleases God our Savior, who wants all people to be saved and to come to a knowledge of the truth. For there is one God and one mediator between God and mankind, the man Christ Jesus, who gave himself as a ransom for all people. This has now been witnessed to at the proper time” (1 Timothy 2:1-6, NIV).

We are merely to plant a seed. Share Christ. Share our newness in Him. Paul said, “You have been set free from sin and have become slaves to righteousness” (Romans 6:18, NIV). We achieve this freedom only through knowing the truth (see John 8:32). Every man is the servant of the master to whose commands he yields himself; whether it be the sinful dispositions of his heart, in actions which lead to death, or the new and spiritual obedience implanted by regeneration. Paul was so pleased to see the new believers at Rome obeying the Gospel from their hearts. Paul wanted to express the great difference in the liberty of the mind and spirit—a complete opposite to the state of slavery to the body and to sin. When we’re willing to remain slaves to sin, we remain in bondage, struggling in our own power to deny the flesh and walk in the Spirit. The Greek word for “slave” in this passage is doulos, meaning “bondsman, man of servile condition.” More specifically, “…devoted to another to the disregard of one’s own interests.”

Paul never gave himself credit for all he did in preaching the Gospel to the Gentiles. Instead, he said, “What, after all, is Apollos? And what is Paul? Only servants, through whom you came to believe—as the Lord has assigned to each his task. I planted the seed, Apollos watered it, but God has been making it grow. So neither the one who plants nor the one who waters is anything, but only God, who makes things grow” (1 Corinthians 3:5-7) [Italics mine]. It is God who gives the increase.

Paul noted, “Therefore I glory in Christ Jesus in my service to God. I will not venture to speak of anything except what Christ has accomplished through me in leading the Gentiles to obey God by what I have said and done—by the power of signs and wonders, through the power of the Spirit of God. So from Jerusalem all the way around to Illyricum, I have fully proclaimed the gospel of Christ” (Romans 15:17-19). Paul went even further, stating he chose to preach the Gospel where others had not gone before him “…so that I would not be building on someone else’s foundation” (v. 20b). I’m amazed at the humility Paul expresses in this simple statement.

We should be proud to serve the Lord successfully, but only when we can (with deference to Him) recognize that we are mere instruments in His hands; instruments of His work and not ultimately the workers ourselves. Because we are God’s instruments—indeed, His co-workers—our goal is to be faithful. He produces fruit through us; we do not give the growth. That would be beyond our capacity. We plant. He waters. He gives the increase. We live faithfully by working hard unto the Lord and by trusting Him to accomplish His purpose. We must never trust in our own efforts. After all, what can we give to God that we have not first received from His hand?

What greater work could there be and what great Co-Worker could we have?

“Then the disciples went out and preached everywhere, and the Lord worked with them and confirmed his word by the signs that accompanied it” (Mark 16:20, NIV).

I Look Foward to a Dialog on This. Please Comment. Cancel reply

a resource for moving poetry

DarylMadden
Poetry for the People

Exploring the Ordinary to Find the Extraordinary

From The Darkness Into The Light

The War is Over
Reflections from the Pew

"And the Word became flesh and made his dwelling among us, and we saw his glory!" John 1:14

THE BRIDE OF CHRIST
The Accidental Apologist

We Are Free Indeed

My Bible Reading, Listening and Living

revelations and reflections from my daily devotion

The Power of Story

The Literary Magazine of the Osterhout Free Library

Serving a little poetic nourishment every morning. Start your day with our new expanded menu. Poems, of course, are our specialty. But we will also be serving a fuller menu that includes poetry book reviews to feed poets' and poetry lovers' souls.

Everything I Never Told You

Lucidly in shadows. Poetry from a hand that writes misty.

Living the hope that comes from Christ